The media have frequently compared the Covid19 situation to a war. In war we must all make sacrifices. And a common battle cry in this particular war is “One death is one too many.”Now, simply imagine that we are faced by a foreign aggressor. And this aggressor threatens to put most of us under virtual House Arrest; to all but close the hospitals for cancer, heart attacks, etc; to close most shops; to shut the airports and ground the airlines; to put millions out of work and send companies into bankruptcy; to close all our schools and Universities; to stop sports events and close theatres; to shut off the political process; to make it illegal for friends to meet. In that situation we would fight to save our liberties, livelihoods, and lifestyle. Not only soldiers, but probably civilians as well, would die. Nobody would question the need for this. Anyone who stood up and shouted “One death is one too many” would probably be lynched on the spot.

What’s the difference here, if we follow through on this war metaphor? Only that in a real war the deaths would primarily be young people in their prime. Fathers of young children, children of older parents, grandchildren, spouses, brothers and sisters. In the Covid war, the casualties are mainly older people, especially those in care homes; people who would not wish economic destruction on their children and grandchildren for the sake of a few more years of their own life.

A little further perspective is in order. On an average day, some 2,400 people die from all causes in the UK. This was happening before Covid, and it will happen afterwards. The figure just now must be rather higher since hospitals are not functioning normally, and there has never been more reason for suicide. There is an epidemic, so more will die than usual. That will be the case whatever we do, whatever we don’t do, however we do it. Currently the figure appears to be around 700 additional deaths per day. I repeat, there is an epidemic, so more will die than usual. We cannot change that simple reality. Depending on which “experts” you listen to, the current measures may or may not make much difference to the final figures. Do we accept all the destructions that lockdown causes in return for the possibility of saving some lives? We certainly wouldn’t if the cause of them was a foreign invasion. 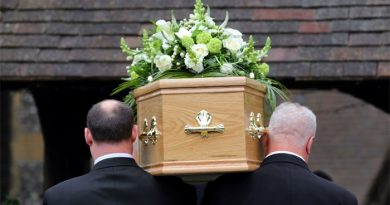 What is Your Real Chance of Dying? It’s Much Less than You Think. 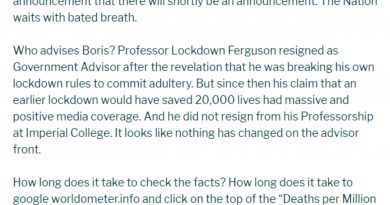 If You Prefer Text Without the Razzamatazz, Click for Our Sister Site. 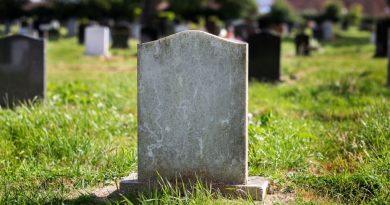 Some Very Logical Thoughts about Death