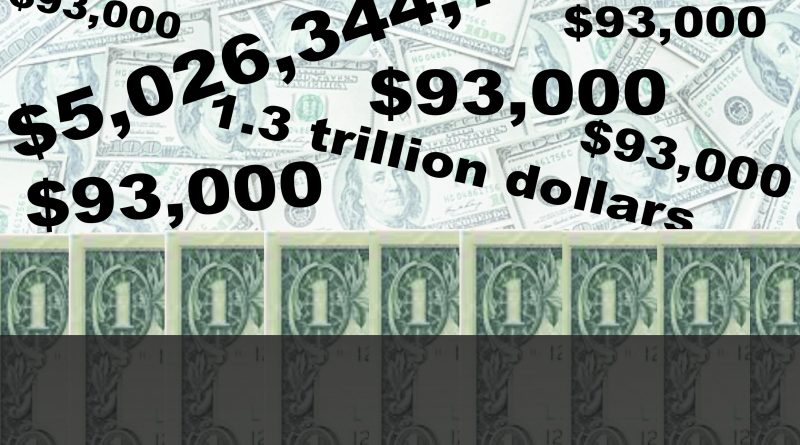 This morning, 20th June, I received a link with some stunning numbers in it. I was fairly certain it was a spoof, but took some time just to make certain. A sample of what it contained is here:

Could these numbers be real? And what is “HHS” supposed to be? The piece did not explain that, so either HHS is well-known, or it’s a figment of someone’s imagination. A quick google came up with “Hyperosmolar hyperglycemic state.” Not helpful. Further searching picked up a US Government site for Health & Human Services, but the numbers on that were even less believable. They talked of a 1.3 trillion budget. Note the “T” for trillion, not “B” for billion or “M” for million. Those numbers vary in size by a factor of one thousand. And “trillion” is the big one. Some quick maths told me they were spending over $2,000,000 every single minute, 24/7. I had to google some more to convince myself this was real. And it is. HHS is the US Pubic Healthcare funder.

It actually gets much worse! These are costs of US Public Healthcare. In England in 2018/19 around £115 billion was spent on the NHS (here). England has a population of 56 million, one sixth of the 328 million in the States. So to run a national health service in the US would cost six times as much: some £690 billion. At current exchange rates that’s $850 billion.

The pop-out from those calculations is this: HHS spends 50% more than the cost to run an American NHS; but the US mostly uses private healthcare, with most people paying large premiums to insurance companies to cover their health. So that massive spend only covers a fraction of the US population! How corrupt does a system have to be to spend such astronomical amounts for such a relatively small benefit? My answer is “Totally corrupt. Obscenely corrupt“

Now those payments for Covid patients become really interesting. Reading the whole article, below or here on the web, we find that these sums are only from “the first $30 billion of emergency funding . . . distributed based on historical share Medicare revenue,” while the next round of grants “will focus on providers in areas particularly impacted by the COVID-19 outbreak.” We have to go to the HHS website (here) to read that “hospitals are paid a fixed amount per COVID-19 inpatient admission” and that in New York, ninety hospitals qualify for a total of $5,026,344,742. New York, of course, had the highest death rate in the World, and we can also read here that some 54,000 people were hospitalised, (with 31,000 deaths, worldometer.info) Hence, the extra funding for New York Hospitals works out at $93,000 per Covid patient.

The media has often claimed that Covid deaths may be under-counted. And also that funding has not skewed the figures. Now that we can see the gross obscenity at the very heart of US health care funding, and also understand that this obscenity has been totally omitted from media reports for years, we can be absolutely certain that money plays a huge, hidden part in the Covid story. And when Nurse Erin Olszewski talks (here) about patients being “thrown” carelessly onto “vents” (ventilators) that killed them, there is a gruesome logic to it. Kill one, make space for the next. $93,000 a pop.

Time to stop fearing the virus. Time to start fearing how Big Money and Big Government are using it.

The first round of grants will be distributed based on historical share Medicare revenue, not based on COVID-19 burden. Therefore, hard-hit states like New York will receive far less per COVID-19 case than most other states.

HHS said it doled out the first slice of funding based on Medicare revenue to get support to hospitals as quickly as possible. The agency said the next round of grants “will focus on providers in areas particularly impacted by the COVID-19 outbreak,” rural hospitals and other healthcare providers that receive much of their revenues from Medicaid.

Below is a breakdown of how much funding per COVID-19 case each state will receive from the first $30 billion in aid. Kaiser Health News used a state breakdown provided to the House Ways and Means Committee by HHS along with COVID-19 cases tabulated by The New York Times for its analysis.

The Spanish Flu was Neither Spanish Nor Flu. Bombshell? Or Atomic Bombshell?